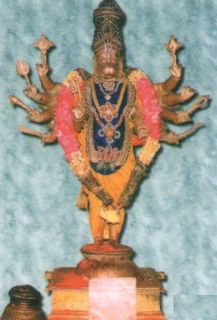 This weekend I was in Karaikal. Amma asked me to visit a Temple.

Its is in a place called AnandhaMangalam – 10 kms from our house. This is a famous Anjaneyaswamy temple.He is DasaBhuja Thrinethra Veera Anjaneyaswamy. This is the second time I am visiting this temple. Sthalapuranam goes like this :

After Ravana Samharam, Rama was on His way to Ayodhya but there came an another Asura who had the potential to destroy the worlds. Since Lord Ram had to reach Nandigramam (to meet Bharatha) and cannot afford to have any delay in reaching Bharatha’s place, He sent Anjaneya to destroy the Asura and save the world. All the gods gave their divya ayudhams to Anjaneya swamy (He holds ten weapons), also the third eye of Lord Shiva. On His victorious march after killing the Asura, He decided to reside in this place called AnanthaMangalam. Perumal is Rukmini Satyabhaama sahitha Venugopalaswamy.

I prayed for all of you, my dear friends!