From tomorrow(27 Feb 2012) Vijay TV is airing “Neengalum Vellalam Orukodi” : Tamil version of “Who wants to be a Millionaire”. I am sure they have invested lot of money as the it is being presented by actor Surya.

They are targeting the prime slot of 8:00pm to 10pm. This is where the TRP topping Sun TV 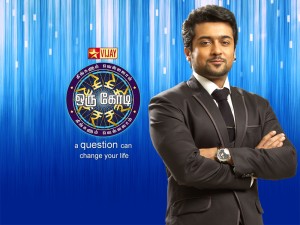 serials are aired: Thirumathi Selvam, Thangam, Thendral & Chellamey. The last 10-15 years of Cable Television in Tamilnadu, Sun TV has rooted out the competition in each stage and still accounts for >70% of viewership. We just can’t say, it was due to their political power: they have survived AIADMK rule for >10 years.We should credit them for their business acumen ‘deep’ understanding of Tamil TV audience. Remember how they crushed the grand launch of “Star Vijay” when the Star group took over with KTV . With low viewership on the soaps, Vijay took different path with programs like Jodi No1, Kalakkapovathu Yaaru, Super Singer, Neeya Naana and has gathered decent viewership in the A-segment. But they still has not penetrated the viewers towns & villages. Interestingly Sun TV bought the complete team of “Kalakkapovathu Yaaru” to answer Vijay TV 🙂 and renamed the program as “Asathapovathu Yaru” and aired it in Sun TV.

What will be the answer to Orukodi from Sun TV?

Orukodi has well proven success formula and it has always remained the No1 program in TRP when it was aired in Star TV/Sony TV. With Surya presenting the Orukodi,we may think it can top the charts or at least get some decent viewership that can be compared to lower ranking Sun TV programs. But, Sun TV has already started giving teaser ads for their version of Orukodi. They will see the initial responses for Vijay’s Orukodi and then plan on how to ‘kill‘ it. They will use all possible ammunition to keep viewers stay away from other Tamil Televisions which they have succeeded every time. Only very few non Sun TV programs found a plan in top 100 Indian TV programs( that too at the tail end of it, but, Sun TV has consistently  has 20 to 30 in top 100). On the other hand, Vijay has other advantes at this time:

In spite of all these, I am sure SUN TV will find a way to work out an strategy to keep viewers hooked to Sun Network channels. or, is there a hope that significant Tamil TV viewers will keep away from their favorite soul-sucking Mega soaps?

We will know the answer in few days.